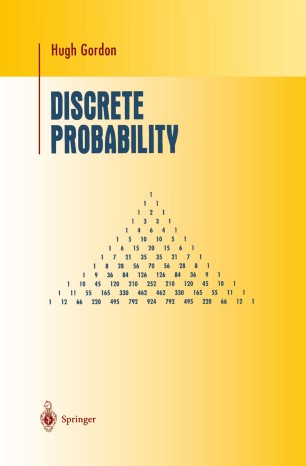 DISCRETE PROBABILITY is a textbook, at a post-calculus level, for a first course in probability. Since continuous probability is not treated, discrete probability can be covered in greater depth. The result is a book of special interest to students majoring in computer science as well as those majoring in mathematics. Since calculus is used only occasionally, students who have forgotten calculus can nevertheless easily understand the book. The slow, gentle style and clear exposition will appeal to students. Basic concepts such as counting, independence, conditional probability, randon variables, approximation of probabilities, generating functions, random walks and Markov chains are presented with good explanation and many worked exercises. An important feature of the book is the abundance of problems, which students may use to master the material. The 1,196 numerical answers to the 405 exercises, many with multiple parts, are included at the end of the book. Throughout the book, various comments on the history of the study of probability are inserted. Biographical information about some of the famous contributors to probability such as Fermat, Pascal, the Bernoullis, DeMoivre, Bayes, Laplace, Poisson, Markov, and many others, is presented. This volume will appeal to a wide range of readers and should be useful in the undergraduate programs at many colleges and universities.