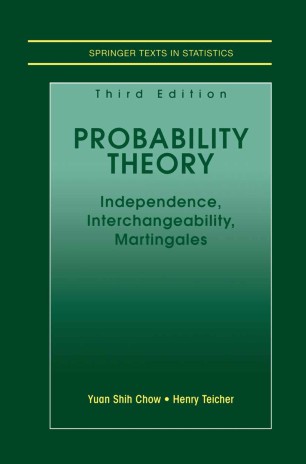 Now available in paperback. This is a text comprising the major theorems of probability theory and the measure theoretical foundations of the subject. The main topics treated are independence, interchangeability,and martingales; particular emphasis is placed upon stopping times, both as tools in proving theorems and as objects of interest themselves. No prior knowledge of measure theory is assumed and a unique feature of the book is the combined presentation of measure and probability. It is easily adapted for graduate students familar with measure theory as indicated by the guidelines in the preface. Special features include: A comprehensive treatment of the law of the iterated logarithm; the Marcinklewicz-Zygmund inequality, its extension to martingales and applications thereof;  development and applications of the second moment analogue of Wald's equation; limit theorems for martingale arrays, the central limit theorem for the interchangeable and martingale cases, moment convergence in the central limit theorem; complete discussion, including central limit theorem, of the random casting of r balls into n cells; recent martingale inequalities; Cram r-L vy theore and factor-closed families of distributions. This edition includes a section dealing with U-statistic, adds additional theorems and examples, and includes simpler versions of some proofs.