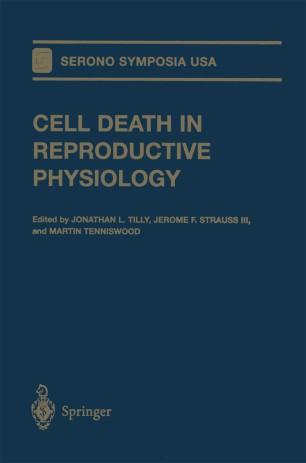 The regulation of cell death in various reproductive tissues, as in other ma­ jor organ systems of the body, has become a focal point of research activity in many laboratories over the past few years. As such, the need for a "for­ mal" meeting to highlight recent work in this field, as well as to integrate knowledge from other sources (such as investigators working on cell death in cancer and immune function) in the broad context of identifying con­ served pathways that coordinate life-and-death decisions in diverse cell types, became apparent. Therefore, the goals of the Scientific Committee of the International Symposium on Cell Death in Reproductive Physiology, spon­ sored by Serono Symposia USA, were already predetermined by this need. Simply stated, we sought to bring together for the first time a select cohort of reproductive biologists and cell death researchers, many but not all cho­ sen based on their pioneering efforts in elucidating the fundamental aspects of apoptosis in reproductive and nonreproductive tissues, as a means to re­ view the current status of the field, foster new ideas, and promote scientific collaborations. In the ensuing chapters of this book, summaries of work dis­ cussed at the meeting are presented to emphasize both the diversity and the similarities in the occurrence and regulation of apoptosis in tissues of the male and female reproductive systems.