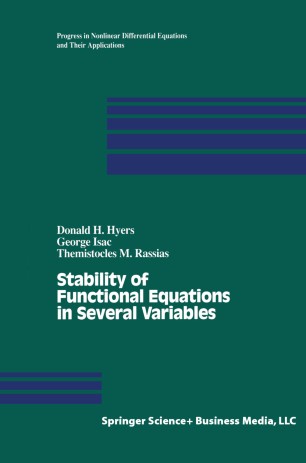 Part of the Progress in Nonlinear Differential Equations and Their Applications book series (PNLDE, volume 34)

The notion of stability of functional equations of several variables in the sense used here had its origins more than half a century ago when S. Ulam posed the fundamental problem and Donald H. Hyers gave the first significant partial solution in 1941. The subject has been revised and de­ veloped by an increasing number of mathematicians, particularly during the last two decades. Three survey articles have been written on the subject by D. H. Hyers (1983), D. H. Hyers and Th. M. Rassias (1992), and most recently by G. L. Forti (1995). None of these works included proofs of the results which were discussed. Furthermore, it should be mentioned that wider interest in this subject area has increased substantially over the last years, yet the pre­ sentation of research has been confined mainly to journal articles. The time seems ripe for a comprehensive introduction to this subject, which is the purpose of the present work. This book is the first to cover the classical results along with current research in the subject. An attempt has been made to present the material in an integrated and self-contained fashion. In addition to the main topic of the stability of certain functional equa­ tions, some other related problems are discussed, including the stability of the convex functional inequality and the stability of minimum points. A sad note. During the final stages of the manuscript our beloved co­ author and friend Professor Donald H. Hyers passed away.