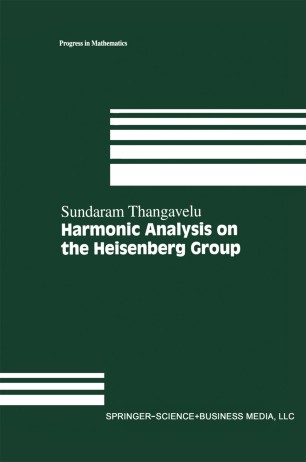 Harmonic Analysis on the Heisenberg Group

Part of the Progress in Mathematics book series (PM, volume 159)

Several results in this monograph appear for the first time in book form, and some theorems have not appeared elsewhere. The detailed discussion of the representation theory of the Heisenberg group goes well beyond the basic Stone-von Neumann theory, and its relations to classical special functions is invaluable for any reader interested in this group. Topic covered include the Plancherel and Paley—Wiener theorems, spectral theory of the sublaplacian, Wiener-Tauberian theorems, Bochner—Riesz means and multipliers for the Fourier transform.

Thangavelu’s exposition is clear and well developed, and leads to several problems worthy of further consideration. Any reader who is interested in pursuing research on the Heisenberg group will find this unique and self-contained text invaluable.

"The author is to be commended for assembling this diverse body of interesting results into a coherent and readable monograph…Thangavelu’s work....gives a useful survey of the field, bringing together a number of recent results which have not appeared elsewhere in book form and which will appeal to a broad mathematical audience..."