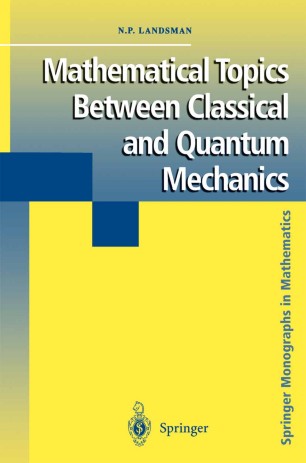 Subject Matter The original title of this book was Tractatus Classico-Quantummechanicus, but it was pointed out to the author that this was rather grandiloquent. In any case, the book discusses certain topics in the interface between classical and quantum mechanics. Mathematically, one looks for similarities between Poisson algebras and symplectic geometry on the classical side, and operator algebras and Hilbert spaces on the quantum side. Physically, one tries to understand how a given quan­ tum system is related to its alleged classical counterpart (the classical limit), and vice versa (quantization). This monograph draws on two traditions: The algebraic formulation of quan­ tum mechanics and quantum field theory, and the geometric theory of classical mechanics. Since the former includes the geometry of state spaces, and even at the operator-algebraic level more and more submerges itself into noncommutative geometry, while the latter is formally part of the theory of Poisson algebras, one should take the words "algebraic" and "geometric" with a grain of salt! There are three central themes. The first is the relation between constructions involving observables on one side, and pure states on the other. Thus the reader will find a unified treatment of certain aspects of the theory of Poisson algebras, oper­ ator algebras, and their state spaces, which is based on this relationship.