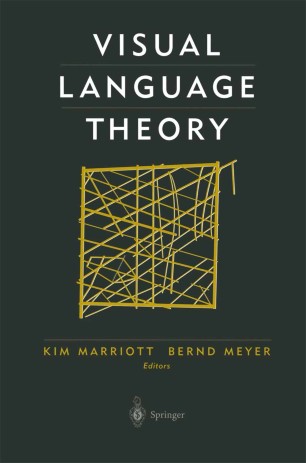 Kim Marriott Bernd Meyer Communication is one of the hallmarks of humans. When we think of hu­ man communication, most people first think of spoken and written lan­ guages. These are similar in that symbols in the language are encountered and processed sequentially, either temporally as they are spoken or as char­ acters are read across a page. However, not all human communication is sequential in nature. Important components of human communication are visual languages, such as maps or diagrams. In these languages the basic symbols are not encountered sequentially but rather seen together at a glance. Visual languages are ubiquitous in human cultures, ranging from tradi­ tional paintings of central Australian aborigines which are, in part, maps of the countryside to an architect's design of a new building. Visual languages have been employed from earliest pre-history to the present and are used in almost every human endeavor. They cover the entire spectrum of human expression ranging from fine art, such as an abstract expressionist's private language, to precise technical communication using rigorously defined no­ tation, such as musical notation, mathematical notation, or street maps. Some visual languages, such as sign languages used by the deaf community, substitute spoken language entirely. Indeed, sign languages, for example American Sign Language, are a particularly interesting instance of visual communication, since they use three-dimensional spatial arrangements of signs in combination with their sequential temporal order to constitute meaning.