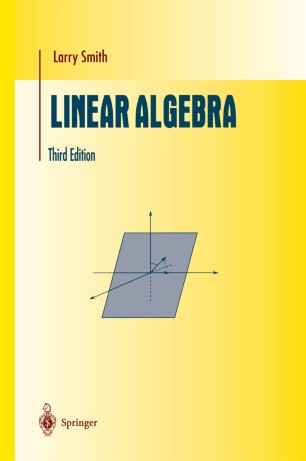 This popular and successful text was originally written for a one-semester course in linear algebra at the sophomore undergraduate level. Consequently, the book deals almost exclusively with real finite dimensional vector spaces, but in a setting and formulation that permits easy generalization to abstract vector spaces. A wide selection of examples of vector spaces and linear transformation is presented to serve as a testing ground for the theory. In the second edition, a new chapter on Jordan normal form was added which reappears here in expanded form as the second goal of this new edition, after the principal axis theorem. To achieve these goals in one semester it is necessary to follow a straight path, but this is compensated by a wide selection of examples and exercises. In addition, the author includes an introduction to invariant theory to show that linear algebra alone is incapable of solving these canonical forms problems. This book is a compact but mathematically clean introduction to linear algebra with particular emphasis on topics in abstract algebra, the theory of differential equations, and group representation theory.