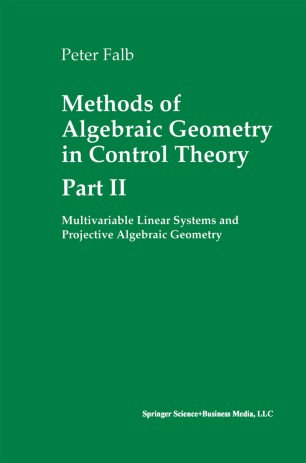 "Control theory represents an attempt to codify, in mathematical terms, the principles and techniques used in the analysis and design of control systems. Algebraic geometry may, in an elementary way, be viewed as the study of the structure and properties of the solutions of systems of algebraic equations. The aim of this book is to provide access to the methods of algebraic geometry for engineers and applied scientists through the motivated context of control theory" .* The development which culminated with this volume began over twenty-five years ago with a series of lectures at the control group of the Lund Institute of Technology in Sweden. I have sought throughout to strive for clarity, often using constructive methods and giving several proofs of a particular result as well as many examples. The first volume dealt with the simplest control systems (i.e., single input, single output linear time-invariant systems) and with the simplest algebraic geometry (i.e., affine algebraic geometry). While this is quite satisfactory and natural for scalar systems, the study of multi-input, multi-output linear time­ invariant control systems requires projective algebraic geometry. Thus, this second volume deals with multi-variable linear systems and pro­ jective algebraic geometry. The results are deeper and less transparent, but are also quite essential to an understanding of linear control theory. A review of * From the Preface to Part 1. viii Preface the scalar theory is included along with a brief summary of affine algebraic geometry (Appendix E).