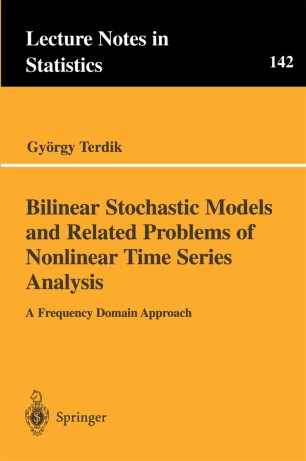 "Ninety percent of inspiration is perspiration. " [31] The Wiener approach to nonlinear stochastic systems [146] permits the representation of single-valued systems with memory for which a small per­ turbation of the input produces a small perturbation of the output. The Wiener functional series representation contains many transfer functions to describe entirely the input-output connections. Although, theoretically, these representations are elegant, in practice it is not feasible to estimate all the finite-order transfer functions (or the kernels) from a finite sam­ ple. One of the most important classes of stochastic systems, especially from a statistical point of view, is the case when all the transfer functions are determined by finitely many parameters. Therefore, one has to seek a finite-parameter nonlinear model which can adequately represent non­ linearity in a series. Among the special classes of nonlinear models that have been studied are the bilinear processes, which have found applica­ tions both in econometrics and control theory; see, for example, Granger and Andersen [43] and Ruberti, et al. [4]. These bilinear processes are de­ fined to be linear in both input and output only, when either the input or output are fixed. The bilinear model was introduced by Granger and Andersen [43] and Subba Rao [118], [119]. Terdik [126] gave the solution of xii a lower triangular bilinear model in terms of multiple Wiener-It(') integrals and gave a sufficient condition for the second order stationarity. An impor­ tant.