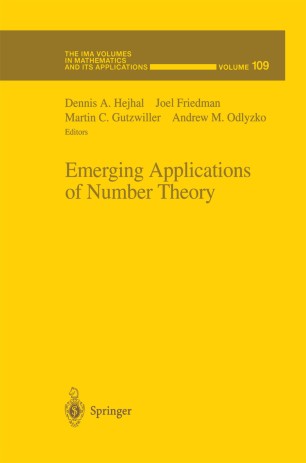 Part of the The IMA Volumes in Mathematics and its Applications book series (IMA, volume 109)

Most people tend to view number theory as the very paradigm of pure mathematics. With the advent of computers, however, number theory has been finding an increasing number of applications in practical settings, such as in cryptography, random number generation, coding theory, and even concert hall acoustics. Yet other applications are still emerging - providing number theorists with some major new areas of opportunity. The 1996 IMA summer program on Emerging Applications of Number Theory was aimed at stimulating further work with some of these newest (and most attractive) applications. Concentration was on number theory's recent links with: (a) wave phenomena in quantum mechanics (more specifically, quantum chaos); and (b) graph theory (especially expander graphs and related spectral theory). This volume contains the contributed papers from that meeting and will be of interest to anyone intrigued by novel applications of modern number-theoretical techniques.