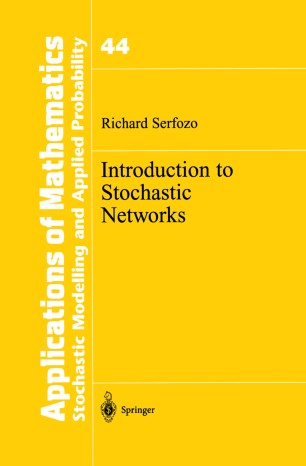 Part of the Applications of Mathematics book series (SMAP, volume 44)

In a stochastic network, such as those in computer/telecommunications and manufacturing, discrete units move among a network of stations where they are processed or served. Randomness may occur in the servicing and routing of units, and there may be queueing for services. This book describes several basic stochastic network processes, beginning with Jackson networks and ending with spatial queueing systems in which units, such as cellular phones, move in a space or region where they are served. The focus is on network processes that have tractable (closed-form) expressions for the equilibrium probability distribution of the numbers of units at the stations. These distributions yield network performance parameters such as expectations of throughputs, delays, costs, and travel times. The book is intended for graduate students and researchers in engineering, science and mathematics interested in the basics of stochastic networks that have been developed over the last twenty years. Assuming a graduate course in stochastic processes without measure theory, the emphasis is on multi-dimensional Markov processes. There is also some self-contained material on point processes involving real analysis. The book also contains rather complete introductions to reversible Markov processes, Palm probabilities for stationary systems, Little laws for queueing systems and space-time Poisson processes. This material is used in describing reversible networks, waiting times at stations, travel times and space-time flows in networks. Richard Serfozo received the Ph.D. degree in Industrial Engineering and Management Sciences at Northwestern University in 1969 and is currently Professor of Industrial and Systems Engineering at Georgia Institute of Technology. Prior to that he held positions in the Boeing Company, Syracuse University, and Bell Laboratories. He has held