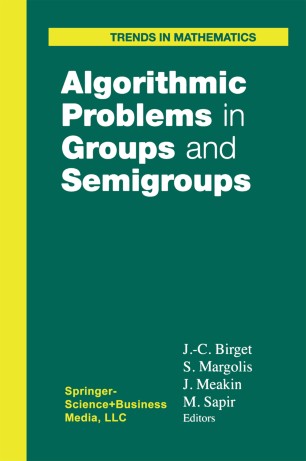 Algorithmic Problems in Groups and Semigroups

This volume contains papers which are based primarily on talks given at an inter­ national conference on Algorithmic Problems in Groups and Semigroups held at the University of Nebraska-Lincoln from May ll-May 16, 1998. The conference coincided with the Centennial Celebration of the Department of Mathematics and Statistics at the University of Nebraska-Lincoln on the occasion of the one hun­ dredth anniversary of the granting of the first Ph.D. by the department. Funding was provided by the US National Science Foundation, the Department of Math­ ematics and Statistics, and the College of Arts and Sciences at the University of Nebraska-Lincoln, through the College's focus program in Discrete, Experimental and Applied Mathematics. The purpose of the conference was to bring together researchers with interests in algorithmic problems in group theory, semigroup theory and computer science. A particularly useful feature of this conference was that it provided a framework for exchange of ideas between the research communities in semigroup theory and group theory, and several of the papers collected here reflect this interac­ tion of ideas. The papers collected in this volume represent a cross section of some of the results and ideas that were discussed in the conference. They reflect a synthesis of overlapping ideas and techniques stimulated by problems concerning finite monoids, finitely presented mono ids, finitely presented groups and free groups.