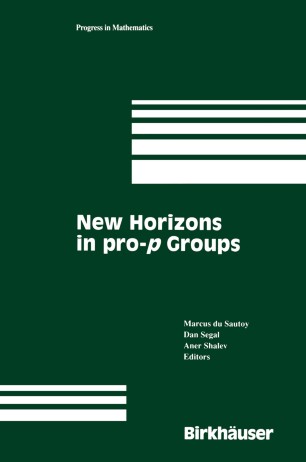 Part of the Progress in Mathematics book series (PM, volume 184)

A pro-p group is the inverse limit of some system of finite p-groups, that is, of groups of prime-power order where the prime - conventionally denoted p - is fixed. Thus from one point of view, to study a pro-p group is the same as studying an infinite family of finite groups; but a pro-p group is also a compact topological group, and the compactness works its usual magic to bring 'infinite' problems down to manageable proportions. The p-adic integers appeared about a century ago, but the systematic study of pro-p groups in general is a fairly recent development. Although much has been dis­ covered, many avenues remain to be explored; the purpose of this book is to present a coherent account of the considerable achievements of the last several years, and to point the way forward. Thus our aim is both to stimulate research and to provide the comprehensive background on which that research must be based. The chapters cover a wide range. In order to ensure the most authoritative account, we have arranged for each chapter to be written by a leading contributor (or contributors) to the topic in question. Pro-p groups appear in several different, though sometimes overlapping, contexts.