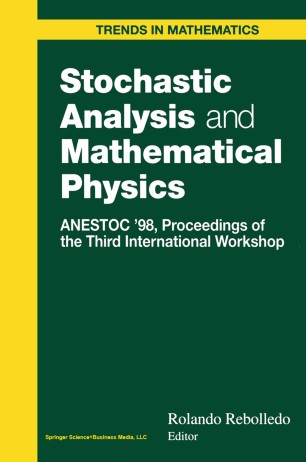 The seminar on Stochastic Analysis and Mathematical Physics started in 1984 at the Catholic University of Chile in Santiago and has been an on­ going research activity. Since 1995, the group has organized international workshops as a way of promoting a broader dialogue among experts in the areas of classical and quantum stochastic analysis, mathematical physics and physics. This volume, consisting primarily of contributions to the Third Inter­ national Workshop on Stochastic Analysis and Mathematical Physics (in Spanish ANESTOC), held in Santiago, Chile, in October 1998, focuses on an analysis of quantum dynamics and related problems in probability the­ ory. Various articles investigate quantum dynamical semigroups and new results on q-deformed oscillator algebras, while others examine the appli­ cation of classical stochastic processes in quantum modeling. As in previous workshops, the topic of quantum flows and semigroups occupied an important place. In her paper, R. Carbone uses a spectral type analysis to obtain exponential rates of convergence towards the equilibrium of a quantum dynamical semigroup in the £2 sense. The method is illus­ trated with a quantum extension of a classical birth and death process. Quantum extensions of classical Markov processes lead to subtle problems of domains. This is in particular illustrated by F. Fagnola, who presents a pathological example of a semigroup for which the largest * -subalgebra (of the von Neumann algebra of bounded linear operators of £2 (lR+, IC)), con­ tained in the domain of its infinitesimal generator, is not a-weakly dense.