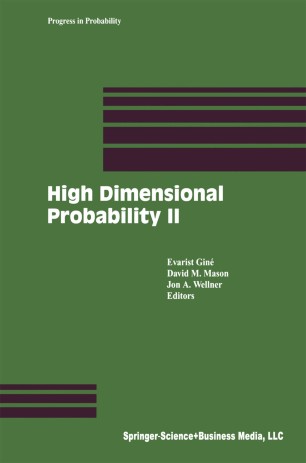 Part of the Progress in Probability book series (PRPR, volume 47)

High dimensional probability, in the sense that encompasses the topics rep­ resented in this volume, began about thirty years ago with research in two related areas: limit theorems for sums of independent Banach space valued random vectors and general Gaussian processes. An important feature in these past research studies has been the fact that they highlighted the es­ sential probabilistic nature of the problems considered. In part, this was because, by working on a general Banach space, one had to discard the extra, and often extraneous, structure imposed by random variables taking values in a Euclidean space, or by processes being indexed by sets in R or Rd. Doing this led to striking advances, particularly in Gaussian process theory. It also led to the creation or introduction of powerful new tools, such as randomization, decoupling, moment and exponential inequalities, chaining, isoperimetry and concentration of measure, which apply to areas well beyond those for which they were created. The general theory of em­ pirical processes, with its vast applications in statistics, the study of local times of Markov processes, certain problems in harmonic analysis, and the general theory of stochastic processes are just several of the broad areas in which Gaussian process techniques and techniques from probability in Banach spaces have made a substantial impact. Parallel to this work on probability in Banach spaces, classical proba­ bility and empirical process theory were enriched by the development of powerful results in strong approximations.