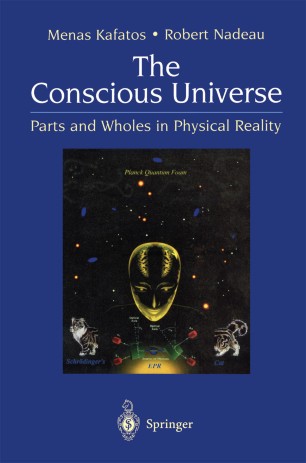 Parts and Wholes in Physical Reality

Imagine that two people have been chosen to be observers in a scien­ tific experiment involving two photons, or quanta of light. These pho­ tons originate from a single source and travel in opposite directions an equal distance halfway across the known universe to points where each will be measured or observed. Now suppose that before the pho­ tons are released, one observer is magically transported to a point of observation halfway across the known universe and the second ob­ server is magically transported to another point an equal distance in the opposite direction. ·The task of the observers is to record or meas­ ure a certain property of each photon with detectors located at the two points so that the data gathered at each can later be compared. Even though the photons are traveling from the source at the speed of light, each observer would have to wait billions of years for one of the photons to arrive at his observation point. Suppose, how­ ever, that the observers are willing to endure this wait because they hope to test the predictions of a mathematical theorem. This theorem not only allows for the prospect that there could be a correlation be­ tween the observed properties of the two photons but also indicates that this correlation could occur instantly, or in no time, in spite of the fact that the distance between the observers and their measuring instruments is billions of light years.