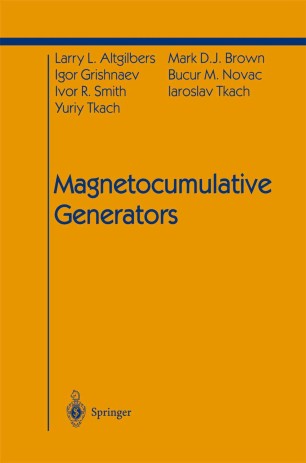 Devices that convert explosive energy into electromagnetic energy are often called Flux Compression Generators (FCGs) in the United States, whereas the term Magnetocumulative Generators (MCGs) is more com­ monly used in Russia. Since the Russian literature is accessed more heavily in this book, the latter term is used here. In any event, the basic process involves using explosives to force an initial magnetic flux into a region of smaller inductance in such a manner that loss of flux is minimized. In the event that no flux is lost, the magnetic energy associated with the flux, inversely proportional to the inductance, must increase. Flux loss is min­ imized by confining it with good conductors which, in turn, are driven rapidly by the explosive to reduce the system inductance. The magnetic energy is increased by the work the conductors do as they are forcibly moved against the magnetic field, the energy, in turn, being supplied by the explosive driving them. As the reader may infer, there are different kinds of generators, some of which might be difficult to recognize as MCGs. Nonetheless, they all possess the features outlined above. Explosives have some unique features as energy sources. They have very high available energy densities; they release energy rapidly, or at high power; they can develop very high pressures.