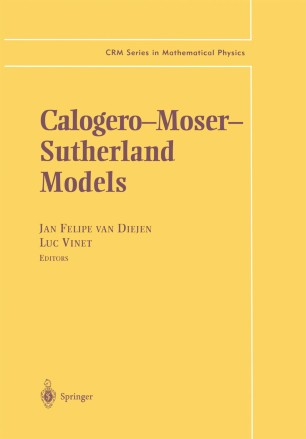 In the 1970s F. Calogero and D. Sutherland discovered that for certain potentials in one-dimensional systems, but for any number of particles, the Schrödinger eigenvalue problem is exactly solvable. Until then, there was only one known nontrivial example of an exactly solvable quantum multi-particle problem. J. Moser subsequently showed that the classical counterparts to these models is also amenable to an exact analytical approach. The last decade has witnessed a true explosion of activities involving Calogero-Moser-Sutherland models, and these now play a role in research areas ranging from theoretical physics (such as soliton theory, quantum field theory, string theory, solvable models of statistical mechanics, condensed matter physics, and quantum chaos) to pure mathematics (such as representation theory, harmonic analysis, theory of special functions, combinatorics of symmetric functions, dynamical systems, random matrix theory, and complex geometry). The aim of this volume is to provide an overview of the many branches into which research on CMS systems has diversified in recent years. The contributions are by leading researchers from various disciplines in whose work CMS systems appear, either as the topic of investigation itself or as a tool for further applications.