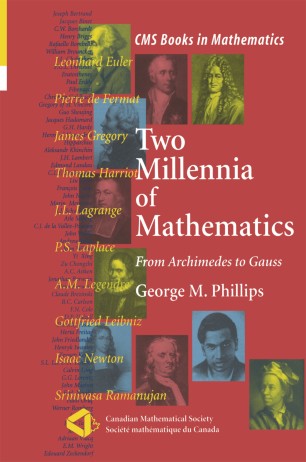 From Archimedes to Gauss

This book is intended for those who love mathematics, including under­ graduate students of mathematics, more experienced students, and the vast number of amateurs, in the literal sense of those who do something for the love of it. I hope it will also be a useful source of material for those who teach mathematics. It is a collection of loosely connected topics in areas of mathematics that particularly interest me, ranging over the two millennia from the work of Archimedes, who died in the year 212 Be, to the Werke of Gauss, who was born in 1777, although there are some references outside this period. In view of its title, I must emphasize that this book is certainly not pretending to be a comprehensive history of the mathematics of this period, or even a complete account of the topics discussed. However, every chapter is written with the history of its topic in mind. It is fascinating, for example, to follow how both Napier and Briggs constructed their log­ arithms before many of the most relevant mathematical ideas had been discovered. Do I really mean "discovered"? There is an old question, "Is mathematics created or discovered?" Sometimes it seems a shame not to use the word "create" in praise of the first mathematician to write down some outstanding result. Yet the inner harmony that sings out from the best of mathematics seems to demand the word "discover.

"In an ideal university the staff would supplement the standard courses by offering lectures in which they talked about topics which they particularly loved at a level which the students could understand. And, in an ideal university, the students would flock to such lectures.
George Phillips' book consists of five short courses to be given at our ideal university. As the title is intended to suggest, the topics are treated with due respect for their history and all have their roots in the works of Gauss or earlier mathematicians. The level chosen is that of a first or second year student and the exposition uses the relaxed "explanation, theorem, proof"style of the best colloquium talks."
London Mathematical Society Newsletter, October 2001


"In five chapters (From Archimedes to Gauss, Logarithms, Interpolation, Continued fractions, More number theory), the author shows that many interesting and important results in mahtematics have been discovered by ordinary people and not onl by great geniuses. Each chapter includes the history of its topic with an interpretation of the mathematical problems. The book shows how and why some results in mathematics have been discovered or obtained, by following the steps of well-known mathematicians who discovered them. It is a useful source of mathematical material for teachers, undergraduate students, students and the vast numbers of amateurs who love mathematics."
European Mathematical Society Newsletter, Issue 41, September 2001
Buy options