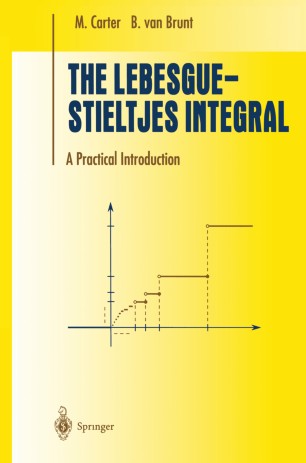 Mathematics students generally meet the Riemann integral early in their undergraduate studies, then at advanced undergraduate or graduate level they receive a course on measure and integration dealing with the Lebesgue theory. However, those whose interests lie more in the direction of applied mathematics will in all probability find themselves needing to use the Lebesgue or Lebesgue-Stieltjes Integral without having the necessary theoretical background. It is to such readers that this book is addressed. The authors aim to introduce the Lebesgue-Stieltjes integral on the real line in a natural way as an extension of the Riemann integral. They have tried to make the treatment as practical as possible. The evaluation of Lebesgue-Stieltjes integrals is discussed in detail, as are the key theorems of integral calculus as well as the standard convergence theorems. The book then concludes with a brief discussion of multivariate integrals and surveys ok L^p spaces and some applications. Exercises, which extend and illustrate the theory, and provide practice in techniques, are included. Michael Carter and Bruce van Brunt are senior lecturers in mathematics at Massey University, Palmerston North, New Zealand. Michael Carter obtained his Ph.D. at Massey University in 1976. He has research interests in control theory and differential equations, and has many years of experience in teaching analysis. Bruce van Brunt obtained his D.Phil. at the University of Oxford in 1989. His research interests include differential geometry, differential equations, and analysis. His publications include