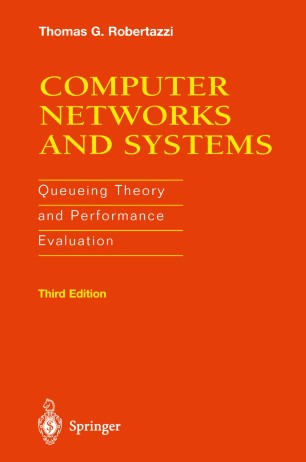 Statistical performance evaluation has assumed an increasing amount of importance as we seek to design more and more sophisticated communication and information processing systems. The ability to predict a proposed system's per­ formance before one constructs it is an extremely cost effective design tool. This book is meant to be a first-year graduate level introduction to the field of statistical performance evaluation. It is intended for people who work with sta­ tistical performance evaluation including engineers, computer scientists and applied mathematicians. As such, it covers continuous time queueing theory (chapters 1-4), stochastic Petri networks (chapter 5), discrete time queueing theory (chapter 6) and recent network traffic modeling work (chapter 7). There is a short appendix at the end of the book that reviews basic probability theory. This material can be taught as a complete semester long course in performance evalua­ tion or queueing theory. Alternatively, one may teach only chapters 2 and 6 in the first half of an introductory computer networking course, as is done at Stony Brook. The second half of the course could use a more protocol oriented text such as ones by Saadawi [SAAD] or Stallings [STALl What is new in the third edition of this book? In addition to the well received material of the second edition, this edition has three major new features.