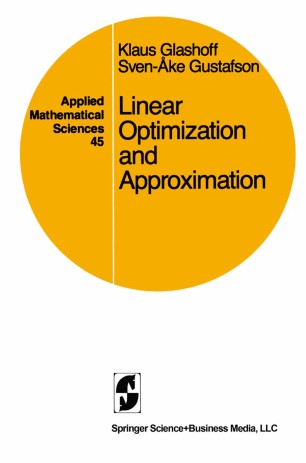 A linear optimization problem is the task of minimizing a linear real-valued function of finitely many variables subject to linear con­ straints; in general there may be infinitely many constraints. This book is devoted to such problems. Their mathematical properties are investi­ gated and algorithms for their computational solution are presented. Applications are discussed in detail. Linear optimization problems are encountered in many areas of appli­ cations. They have therefore been subject to mathematical analysis for a long time. We mention here only two classical topics from this area: the so-called uniform approximation of functions which was used as a mathematical tool by Chebyshev in 1853 when he set out to design a crane, and the theory of systems of linear inequalities which has already been studied by Fourier in 1823. We will not treat the historical development of the theory of linear optimization in detail. However, we point out that the decisive break­ through occurred in the middle of this century. It was urged on by the need to solve complicated decision problems where the optimal deployment of military and civilian resources had to be determined. The availability of electronic computers also played an important role. The principal computational scheme for the solution of linear optimization problems, the simplex algorithm, was established by Dantzig about 1950. In addi­ tion, the fundamental theorems on such problems were rapidly developed, based on earlier published results on the properties of systems of linear inequalities.