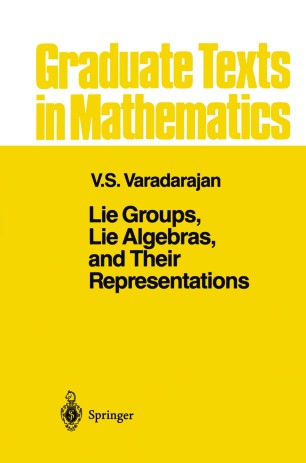 This book has grown out of a set of lecture notes I had prepared for a course on Lie groups in 1966. When I lectured again on the subject in 1972, I revised the notes substantially. It is the revised version that is now appearing in book form. The theory of Lie groups plays a fundamental role in many areas of mathematics. There are a number of books on the subject currently available -most notably those of Chevalley, Jacobson, and Bourbaki-which present various aspects of the theory in great depth. However, 1 feei there is a need for a single book in English which develops both the algebraic and analytic aspects of the theory and which goes into the representation theory of semi­ simple Lie groups and Lie algebras in detail. This book is an attempt to fiii this need. It is my hope that this book will introduce the aspiring graduate student as well as the nonspecialist mathematician to the fundamental themes of the subject. I have made no attempt to discuss infinite-dimensional representations. This is a very active field, and a proper treatment of it would require another volume (if not more) of this size. However, the reader who wants to take up this theory will find that this book prepares him reasonably well for that task.