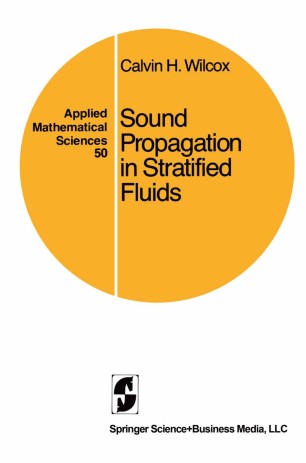 Stratified fluids whose densities, sound speeds and other parameters are functions of a single depth coordinate occur widely in nature. Indeed, the earth's gravitational field imposes a stratification on its atmosphere, oceans and lakes. It is well known that their stratification has a profound effect on the propagation of sound in these fluids. The most striking effect is probably the occurrence of acoustic ducts, due to minima of the sound speed, that can trap sound waves and cause them to propagate hori­ zontally. The reflection, transmission and distortion of sonar signals by acoustic ducts is important in interpreting sonar echoes. Signal scattering by layers of microscopic marine organisms is important to both sonar engi­ neers and marine biologists. Again, reflection of signals from bottom sediment layers overlying a penetrable bottom are of interest both as sources of unwanted echoes and in the acoustic probing of such layers. Many other examples could be given. The purpose of this monograph is to develop from first principles a theory of sound propagation in stratified fluids whose densities and sound speeds are essentially arbitrary functions of the depth. In physical terms, the propagation of both time-harmonic and transient fields is analyzed. The corresponding mathematical model leads to the study of boundary value problems for a scalar wave equation whose coefficients contain the pre­ scribed density and sound speed functions.