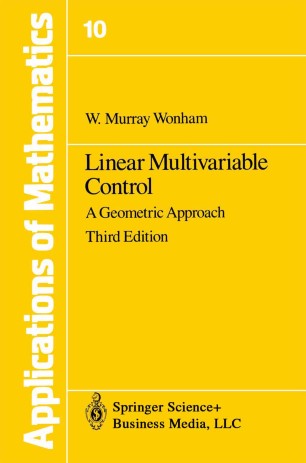 Part of the Applications of Mathematics book series (SMAP, volume 10)

In wntmg this monograph my aim has been to present a "geometric" approach to the structural synthesis of multivariable control systems that are linear, time-invariant and of finite dynamic order. The book is ad­ dressed to graduate students specializing in control, to engineering scientists involved in control systems research and development, and to mathemati­ cians interested in systems control theory. The label "geometric" in the title is applied for several reasons. First and obviously, the setting is linear state space and the mathematics chiefly linear algebra in abstract (geometric) style. The basic ideas are the familiar system concepts of controllability and observability, thought of as geometric prop­ erties of distinguished state subspaces. Indeed, the geometry was first brought in out of revulsion against the orgy of matrix manipulation which linear control theory mainly consisted of, around fifteen years ago. But secondly and of greater interest, the geometric setting rather quickly sug­ gested new methods of attacking synthesis which have proved to be intuitive and economical; they are also easily reduced to matrix arithmetic as soon as you want to compute. The essence of the "geometric" approach is just this: instead of looking directly for a feedback law (say u = Fx) which would solve your synthesis problem if a solution exists, first characterize solvability as a verifiable property of some constructible state subspace, say Y. Then, if all is well, you may calculate F from Y quite easily.