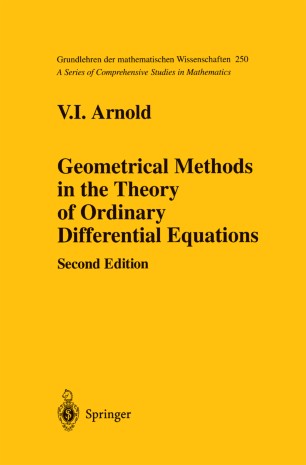 Geometrical Methods in the Theory of Ordinary Differential Equations

Since the first edition of this book, geometrical methods in the theory of ordinary differential equations have become very popular and some progress has been made partly with the help of computers. Much of this progress is represented in this revised, expanded edition, including such topics as the Feigenbaum universality of period doubling, the Zoladec solution, the Iljashenko proof, the Ecalle and Voronin theory, the Varchenko and Hovanski theorems, and the Neistadt theory. In the selection of material for this book, the author explains basic ideas and methods applicable to the study of differential equations. Special efforts were made to keep the basic ideas free from excessive technicalities. Thus the most fundamental questions are considered in great detail, while of the more special and difficult parts of the theory have the character of a survey. Consequently, the reader needs only a general mathematical knowledge to easily follow this text. It is directed to mathematicians, as well as all users of the theory of differential equations.