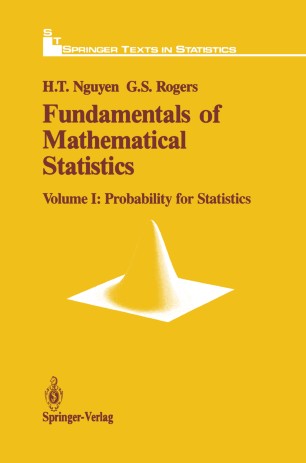 This is the first half of a text for a two semester course in mathematical statistics at the senior/graduate level for those who need a strong background in statistics as an essential tool in their career. To study this text, the reader needs a thorough familiarity with calculus including such things as Jacobians and series but somewhat less intense familiarity with matrices including quadratic forms and eigenvalues. For convenience, these lecture notes were divided into two parts: Volume I, Probability for Statistics, for the first semester, and Volume II, Statistical Inference, for the second. We suggest that the following distinguish this text from other introductions to mathematical statistics. 1. The most obvious thing is the layout. We have designed each lesson for the (U.S.) 50 minute class; those who study independently probably need the traditional three hours for each lesson. Since we have more than (the U.S. again) 90 lessons, some choices have to be made. In the table of contents, we have used a * to designate those lessons which are "interesting but not essential" (INE) and may be omitted from a general course; some exercises and proofs in other lessons are also "INE". We have made lessons of some material which other writers might stuff into appendices. Incorporating this freedom of choice has led to some redundancy, mostly in definitions, which may be beneficial.