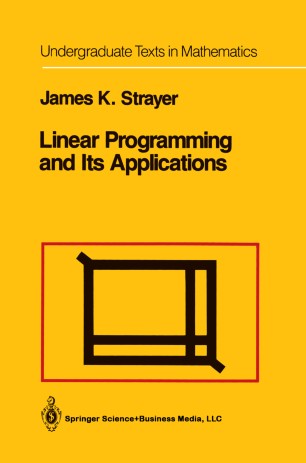 Linear Programming and Its Applications

Linear Programming and Its Applications is intended for a first course in linear programming, preferably in the sophomore or junior year of the typical undergraduate curriculum. The emphasis throughout the book is on linear programming skills via the algorithmic solution of small-scale problems, both in the general sense and in the specific applications where these problems naturally occur. The book arose from lecture notes prepared during the years 1985-1987 while I was a graduate assistant in the Department of Mathematics at The Pennsylvania State University. I used a preliminary draft in a Methods of Management Science class in the spring semester of 1988 at Lock Haven University. Having been extensively tried and tested in the classroom at various stages of its development, the book reflects many modifications either suggested directly by students or deemed appropriate from responses by students in the classroom setting. My primary aim in writing the book was to address common errors and difficulties as clearly and effectively as I could.