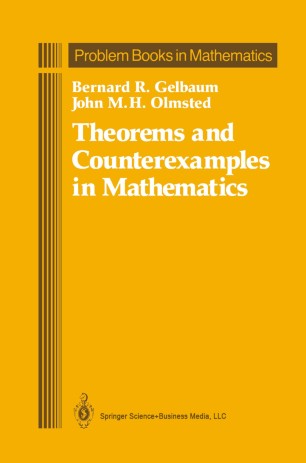 Theorems and Counterexamples in Mathematics

The gratifying response to Counterexamples in analysis (CEA) was followed, when the book went out of print, by expressions of dismay from those who were unable to acquire it. The connection of the present volume with CEA is clear, although the sights here are set higher. In the quarter-century since the appearance of CEA, mathematical education has taken some large steps reflected in both the undergraduate and graduate curricula. What was once taken as very new, remote, or arcane is now a well-established part of mathematical study and discourse. Consequently the approach here is designed to match the observed progress. The contents are intended to provide graduate and ad­ vanced undergraduate students as well as the general mathematical public with a modern treatment of some theorems and examples that constitute a rounding out and elaboration of the standard parts of algebra, analysis, geometry, logic, probability, set theory, and topology. The items included are presented in the spirit of a conversation among mathematicians who know the language but are interested in some of the ramifications of the subjects with which they routinely deal. Although such an approach might be construed as demanding, there is an extensive GLOSSARY jlNDEX where all but the most familiar notions are clearly defined and explained. The object ofthe body of the text is more to enhance what the reader already knows than to review definitions and notations that have become part of every mathematician's working context.