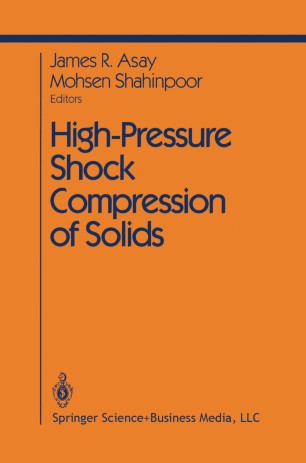 This book presents a set of basic understandings of the behavior and response of solids to propagating shock waves. The propagation of shock waves in a solid body is accompanied by large compressions, decompression, and shear. Thus, the shear strength of solids and any inelastic response due to shock­ wave propagation is of the utmost importance. Furthermore, shock compres­ sion of solids is always accompanied by heating, and the rise of local tempera­ ture which may be due to both compression and dissipation. For many solids, under a certain range of impact pressures, a two-wave structure arises such that the first wave, called the elastic prescursor, travels with the speed of sound; and the second wave, called a plastic shock wave, travels at a slower speed. Shock-wave loading of solids is normally accomplished by either projectile impact, such as produced by guns or by explosives. The shock heating and compression of solids covers a wide range of temperatures and densities. For example, the temperature may be as high as a few electron volts (1 eV = 11,500 K) for very strong shocks and the densification may be as high as four times the normal density.