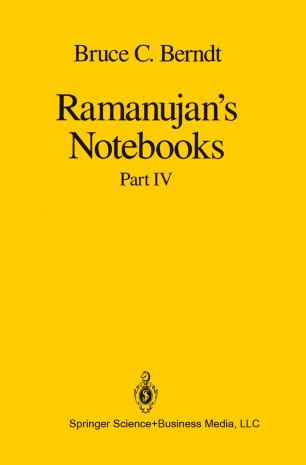 During the years 1903-1914, Ramanujan worked in almost complete isolation in India. During this time, he recorded most of his mathematical discoveries without proofs in notebooks. Although many of his results were already found in the literature, most were not. Almost a decade after Ramanujan's death in 1920, G.N. Watson and B.M. Wilson began to edit Ramanujan's notebooks, but they never completed the task. A photostat edition, with no editing, was published by the Tata Institute of Fundamental Research in Bombay in 1957. This book is the fourth of five volumes devoted to the editing of Ramanujan's notebooks. Parts I, II, and III, published in 1985, 1989, and 1991, contain accounts of Chapters 1-21 in Ramanujan's second notebook as well as a description of his quarterly reports. This is the first of two volumes devoted to proving the results found in the unorganized portions of the second notebook and in the third notebook. The author also proves those results in the first notebook that are not found in the second or third notebooks. For those results that are known, references in the literature are provided. Otherwise, complete proofs are given. Over 1/2 of the results in the notebooks are new. Many of them are so startling and different that there are no results akin to them in the literature.