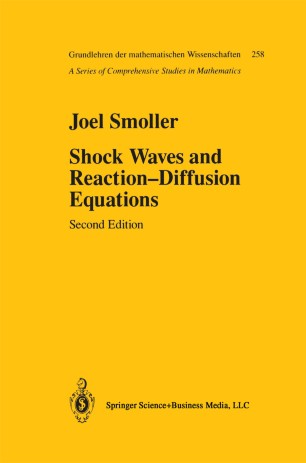 For this edition, a number of typographical errors and minor slip-ups have been corrected. In addition, following the persistent encouragement of Olga Oleinik, I have added a new chapter, Chapter 25, which I titled "Recent Results." This chapter is divided into four sections, and in these I have discussed what I consider to be some of the important developments which have come about since the writing of the first edition. Section I deals with reaction-diffusion equations, and in it are described both the work of C. Jones, on the stability of the travelling wave for the Fitz-Hugh-Nagumo equations, and symmetry-breaking bifurcations. Section II deals with some recent results in shock-wave theory. The main topics considered are L. Tartar's notion of compensated compactness, together with its application to pairs of conservation laws, and T.-P. Liu's work on the stability of viscous profiles for shock waves. In the next section, Conley's connection index and connection matrix are described; these general notions are useful in con­ structing travelling waves for systems of nonlinear equations. The final sec­ tion, Section IV, is devoted to the very recent results of C. Jones and R. Gardner, whereby they construct a general theory enabling them to locate the point spectrum of a wide class of linear operators which arise in stability problems for travelling waves. Their theory is general enough to be applica­ ble to many interesting reaction-diffusion systems.