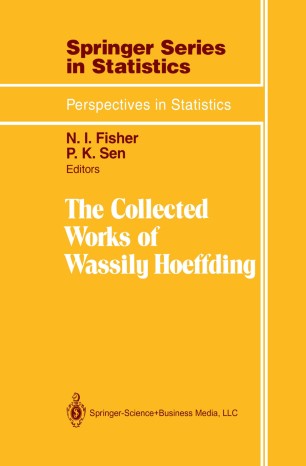 The Collected Works of Wassily Hoeffding

It has been a rare privilege to assemble this volume of Wassily Hoeffding's Collected Works. Wassily was, variously, a teacher, supervisor and colleague to us, and his work has had a profound influence on our own. Yet this would not be sufficient reason to publish his collected works. The additional and overwhelmingly compelling justification comes from the fun­ damental nature of his contributions to Statistics and Probability. Not only were his ideas original, and far-reaching in their implications; Wassily de­ veloped them so completely and elegantly in his papers that they are still cited as prime references up to half a century later. However, three of his earliest papers are cited rarely, if ever. These include material from his doctoral dissertation. They were written in German, and two of them were published in relatively obscure series. Rather than reprint the original articles, we have chosen to have them translated into English. These trans­ lations appear in this book, making Wassily's earliest research available to a wide audience for the first time. All other articles (including those of his contributions to Mathematical Reviews which go beyond a simple reporting of contents of articles) have been reproduced as they appeared, together with annotations and corrections made by Wassily on some private copies of his papers. Preceding these articles are three review papers which dis­ cuss the . impact of his work in some of the areas where he made major contributions.

"Wassily Hoeffding was one of the giants in the development of the field of statistics. His work was path-breaking and deep, he pursued it with tenacity, and demanded the highest standards of himself." Norman Johnson
Buy options