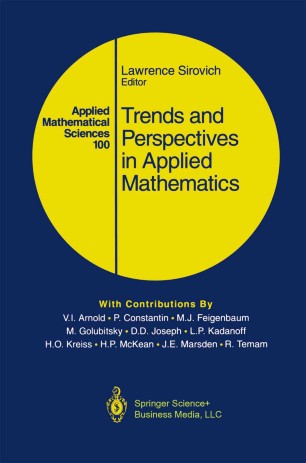 Trends and Perspectives in Applied Mathematics

This marks the 100th volume to appear in the Applied Mathematical Sci­ ences series. Partial Differential Equations, by Fritz John, the first volume of the series, appeared in 1971. One year prior to its appearance, the then mathematics editor of Springer-Verlag, Klaus Peters, organized a meeting to look into the possibility of starting a series slanted toward applications. The meeting took place in New Rochelle, at the home of Fritz and Char­ lotte John. K.O. Friedrichs, Peter Lax, Monroe Donsker, Joe Keller, and others from the Courant Institute (previously, the Institute for Mathemat­ ical Sciences) were present as were Joe LaSalle and myself, the two of us having traveled down from Providence for the meeting. The John home, a large, comfortable house, especially lent itself to the informal, relaxed, and wide-ranging discussion that ensued. What emerged was a consensus that mathematical applications appeared to be poised for a period of growth and that there was a clear need for a series committed to applied mathematics. The first paragraph ofthe editorial statement written at that time reads as follows: The mathematization of all sciences, the fading of traditional scientific boundaries, the impact of computer technology, the growing importance of mathematical-computer modeling and the necessity of scientific planning all create the need both in education and research for books that are introductory to and abreast of these developments.