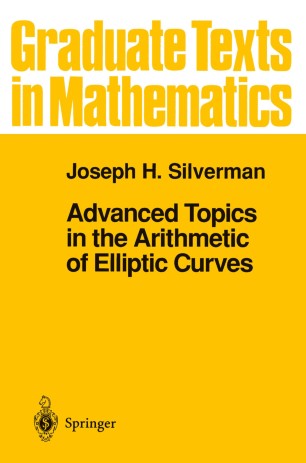 In the introduction to the first volume of The Arithmetic of Elliptic Curves (Springer-Verlag, 1986), I observed that "the theory of elliptic curves is rich, varied, and amazingly vast," and as a consequence, "many important topics had to be omitted." I included a brief introduction to ten additional topics as an appendix to the first volume, with the tacit understanding that eventually there might be a second volume containing the details. You are now holding that second volume. it turned out that even those ten topics would not fit Unfortunately, into a single book, so I was forced to make some choices. The following material is covered in this book: I. Elliptic and modular functions for the full modular group. II. Elliptic curves with complex multiplication. III. Elliptic surfaces and specialization theorems. IV. Neron models, Kodaira-Neron classification of special fibers, Tate's algorithm, and Ogg's conductor-discriminant formula. V. Tate's theory of q-curves over p-adic fields. VI. Neron's theory of canonical local height functions.