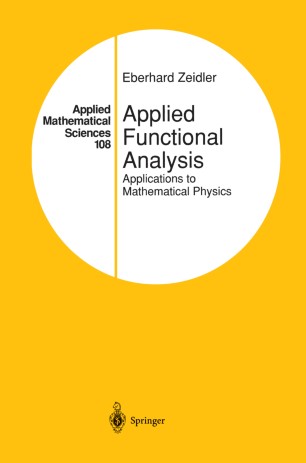 A theory is the more impressive, the simpler are its premises, the more distinct are the things it connects, and the broader is its range of applicability. Albert Einstein There are two different ways of teaching mathematics, namely, (i) the systematic way, and (ii) the application-oriented way. More precisely, by (i), I mean a systematic presentation of the material governed by the desire for mathematical perfection and completeness of the results. In contrast to (i), approach (ii) starts out from the question "What are the most important applications?" and then tries to answer this question as quickly as possible. Here, one walks directly on the main road and does not wander into all the nice and interesting side roads. The present book is based on the second approach. It is addressed to undergraduate and beginning graduate students of mathematics, physics, and engineering who want to learn how functional analysis elegantly solves mathematical problems that are related to our real world and that have played an important role in the history of mathematics. The reader should sense that the theory is being developed, not simply for its own sake, but for the effective solution of concrete problems. viii Preface This introduction to functional analysis is divided into the following two parts: Part I: Applications to mathematical physics (the present AMS Vol. 108); Part II: Main principles and their applications (AMS Vol. 109).