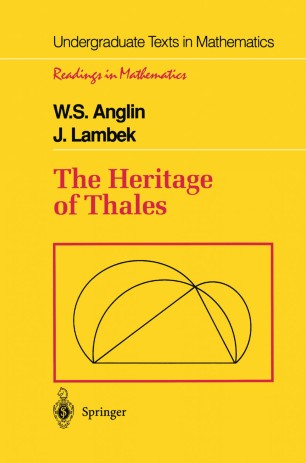 The Heritage of Thales

This is intended as a textbook on the history, philosophy and foundations of mathematics, primarily for students specializing in mathematics, but we also wish to welcome interested students from the sciences, humanities and education. We have attempted to give approximately equal treatment to the three subjects: history, philosophy and mathematics. History We must emphasize that this is not a scholarly account of the history of mathematics, but rather an attempt to teach some good mathematics in a historical context. Since neither of the authors is a professional historian, we have made liberal use of secondary sources. We have tried to give ref­ cited facts and opinions. However, considering that this text erences for developed by repeated revisions from lecture notes of two courses given by one of us over a 25 year period, some attributions may have been lost. We could not resist retelling some amusing anecdotes, even when we suspect that they have no proven historical basis. As to the mathematicians listed in our account, we admit to being colour and gender blind; we have not attempted a balanced distribution of the mathematicians listed to meet today's standards of political correctness. Philosophy Both authors having wide philosophical interests, this text contains perhaps more philosophical asides than other books on the history of mathematics. For example, we discuss the relevance to mathematics of the pre-Socratic philosophers and of Plato, Aristotle, Leibniz and Russell. We also have vi Preface presented some original insights.