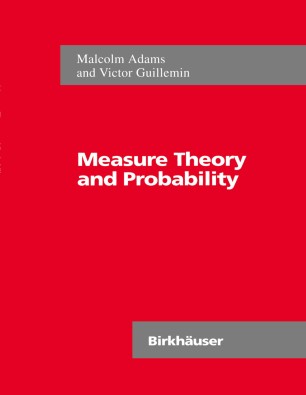 Measure theory and integration are presented to undergraduates from the perspective of probability theory. The first chapter shows why measure theory is needed for the formulation of problems in probability, and explains why one would have been forced to invent Lebesgue theory (had it not already existed) to contend with the paradoxes of large numbers. The measure-theoretic approach then leads to interesting applications and a range of topics that include the construction of the Lebesgue measure on R [superscript n] (metric space approach), the Borel-Cantelli lemmas, straight measure theory (the Lebesgue integral). Chapter 3 expands on abstract Fourier analysis, Fourier series and the Fourier integral, which have some beautiful probabilistic applications: Polya's theorem on random walks, Kac's proof of the Szegö theorem and the central limit theorem. In this concise text, quite a few applications to probability are packed into the exercises.

"…the text is user friendly to the topics it considers and should be very accessible…Instructors and students of statistical measure theoretic courses will appreciate the numerous informative exercises; helpful hints or solution outlines are given with many of the problems. All in all, the text should make a useful reference for professionals and students."—The Journal of the American Statistical Association