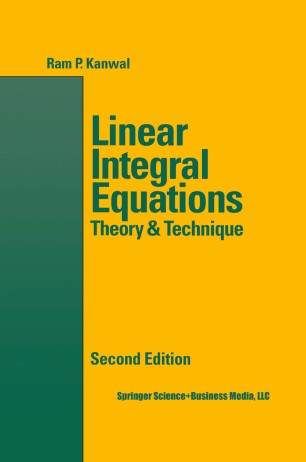 This second edition of Linear Integral Equations continues the emphasis that the first edition placed on applications. Indeed, many more examples have been added throughout the text. Significant new material has been added in Chapters 6 and 8. For instance, in Chapter 8 we have included the solutions of the Cauchy type integral equations on the real line. Also, there is a section on integral equations with a logarithmic kernel. The bibliography at the end of the book has been exteded and brought up to date. I wish to thank Professor B.K. Sachdeva who has checked the revised man­ uscript and has suggested many improvements. Last but not least, I am grateful to the editor and staff of Birkhauser for inviting me to prepare this new edition and for their support in preparing it for publication. RamP Kanwal CHAYfERl Introduction 1.1. Definition An integral equation is an equation in which an unknown function appears under one or more integral signs Naturally, in such an equation there can occur other terms as well. For example, for a ~ s ~ b; a :( t :( b, the equations (1.1.1) f(s) = ib K(s, t)g(t)dt, g(s) = f(s) + ib K(s, t)g(t)dt, (1.1.2) g(s) = ib K(s, t)[g(t)fdt, (1.1.3) where the function g(s) is the unknown function and all the other functions are known, are integral equations. These functions may be complex-valued functions of the real variables s and t.