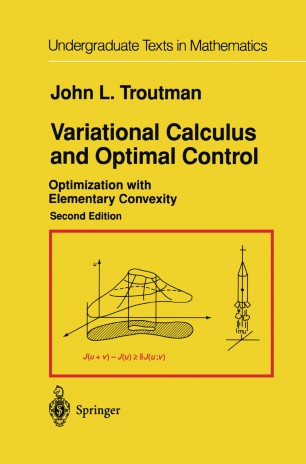 Although the calculus of variations has ancient origins in questions of Ar­ istotle and Zenodoros, its mathematical principles first emerged in the post­ calculus investigations of Newton, the Bernoullis, Euler, and Lagrange. Its results now supply fundamental tools of exploration to both mathematicians and those in the applied sciences. (Indeed, the macroscopic statements ob­ tained through variational principles may provide the only valid mathemati­ cal formulations of many physical laws. ) Because of its classical origins, variational calculus retains the spirit of natural philosophy common to most mathematical investigations prior to this century. The original applications, including the Bernoulli problem of finding the brachistochrone, require opti­ mizing (maximizing or minimizing) the mass, force, time, or energy of some physical system under various constraints. The solutions to these problems satisfy related differential equations discovered by Euler and Lagrange, and the variational principles of mechanics (especially that of Hamilton from the last century) show the importance of also considering solutions that just provide stationary behavior for some measure of performance of the system. However, many recent applications do involve optimization, in particular, those concerned with problems in optimal control. Optimal control is the rapidly expanding field developed during the last half-century to analyze optimal behavior of a constrained process that evolves in time according to prescribed laws. Its applications now embrace a variety of new disciplines, including economics and production planning.