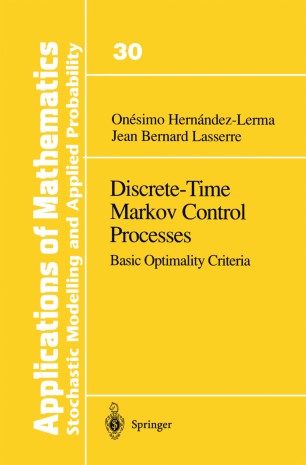 Part of the Applications of Mathematics book series (SMAP, volume 30)

This book presents the first part of a planned two-volume series devoted to a systematic exposition of some recent developments in the theory of discrete-time Markov control processes (MCPs). Interest is mainly confined to MCPs with Borel state and control (or action) spaces, and possibly unbounded costs and noncompact control constraint sets. MCPs are a class of stochastic control problems, also known as Markov decision processes, controlled Markov processes, or stochastic dynamic pro­ grams; sometimes, particularly when the state space is a countable set, they are also called Markov decision (or controlled Markov) chains. Regardless of the name used, MCPs appear in many fields, for example, engineering, economics, operations research, statistics, renewable and nonrenewable re­ source management, (control of) epidemics, etc. However, most of the lit­ erature (say, at least 90%) is concentrated on MCPs for which (a) the state space is a countable set, and/or (b) the costs-per-stage are bounded, and/or (c) the control constraint sets are compact. But curiously enough, the most widely used control model in engineering and economics--namely the LQ (Linear system/Quadratic cost) model-satisfies none of these conditions. Moreover, when dealing with "partially observable" systems) a standard approach is to transform them into equivalent "completely observable" sys­ tems in a larger state space (in fact, a space of probability measures), which is uncountable even if the original state process is finite-valued.