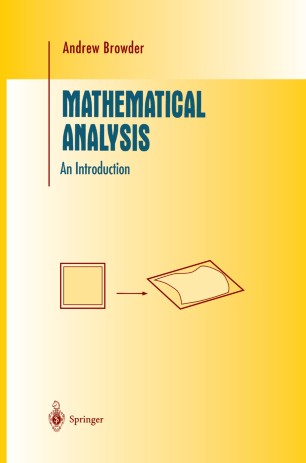 This is a textbook suitable for a year-long course in analysis at the ad­ vanced undergraduate or possibly beginning-graduate level. It is intended for students with a strong background in calculus and linear algebra, and a strong motivation to learn mathematics for its own sake. At this stage of their education, such students are generally given a course in abstract algebra, and a course in analysis, which give the fundamentals of these two areas, as mathematicians today conceive them. Mathematics is now a subject splintered into many specialties and sub­ specialties, but most of it can be placed roughly into three categories: al­ gebra, geometry, and analysis. In fact, almost all mathematics done today is a mixture of algebra, geometry and analysis, and some of the most in­ teresting results are obtained by the application of analysis to algebra, say, or geometry to analysis, in a fresh and surprising way. What then do these categories signify? Algebra is the mathematics that arises from the ancient experiences of addition and multiplication of whole numbers; it deals with the finite and discrete. Geometry is the mathematics that grows out of spatial experience; it is concerned with shape and form, and with measur­ ing, where algebra deals with counting.

This is a very good textbook presenting a modern course in analysis both at the advanced undergraduate and at the beginning graduate level. It contains 14 chapters, a bibliography, and an index. At the end of each chapter interesting exercises and historical notes are enclosed.\par From the cover: ``The book begins with a brief discussion of sets and mappings, describes the real number field, and proceeds to a treatment of real-valued functions of a real variable. Separate chapters are devoted to the ideas of convergent sequences and series, continuous functions, differentiation, and the Riemann integral (of a real-valued function defined on a compact interval). The middle chapters cover general topology and a miscellany of applications: the Weierstrass and Stone-Weierstrass approximation theorems, the existence of geodesics in compact metric spaces, elements of Fourier analysis, and the Weyl equidistribution theorem. Next comes a discussion of differentiation of vector-valued functions of several real variables, followed by a brief treatment of measure and integration (in a general setting, but with emphasis on Lebesgue theory in Euclidean spaces). The final part of the book deals with manifolds, differential forms, and Stokes' theorem [in the spirit of M. Spivak's: ``Calculus on manifolds'' (1965; Zbl 141.05403)] which is applied to prove Brouwer's fixed point theorem and to derive the basic properties of harmonic functions, such as the Dirichlet principle''. ZENTRALBLATT MATH

"Everything needed is clearly defined and formulated, and there is a reasonable number of examples…. Anyone teaching a year course at this level to should seriously consider this carefully written book. In the reviewer's opinion, it would be a real pleasure to use this text with such a class."—MATHEMATICAL REVIEWS