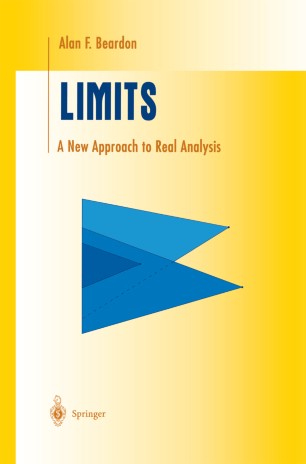 A New Approach to Real Analysis

Broadly speaking, analysis is the study of limiting processes such as sum­ ming infinite series and differentiating and integrating functions, and in any of these processes there are two issues to consider; first, there is the question of whether or not the limit exists, and second, assuming that it does, there is the problem of finding its numerical value. By convention, analysis is the study oflimiting processes in which the issue of existence is raised and tackled in a forthright manner. In fact, the problem of exis­ tence overshadows that of finding the value; for example, while it might be important to know that every polynomial of odd degree has a zero (this is a statement of existence), it is not always necessary to know what this zero is (indeed, if it is irrational, we may never know what its true value is). Despite the fact that this book has much in common with other texts on analysis, its approach to the subject differs widely from any other text known to the author. In other texts, each limiting process is discussed, in detail and at length before the next process. There are several disadvan­ tages in this approach. First, there is the need for a different definition for each concept, even though the student will ultimately realise that these different definitions have much in common.