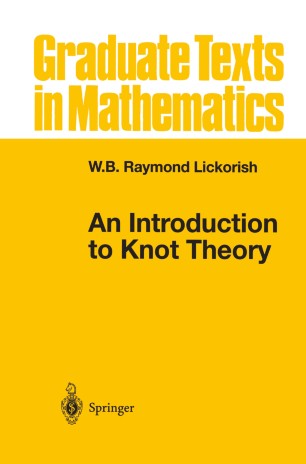 An Introduction to Knot Theory

This account is an introduction to mathematical knot theory, the theory of knots and links of simple closed curves in three-dimensional space. Knots can be studied at many levels and from many points of view. They can be admired as artifacts of the decorative arts and crafts, or viewed as accessible intimations of a geometrical sophistication that may never be attained. The study of knots can be given some motivation in terms of applications in molecular biology or by reference to paral­ lels in equilibrium statistical mechanics or quantum field theory. Here, however, knot theory is considered as part of geometric topology. Motivation for such a topological study of knots is meant to come from a curiosity to know how the ge­ ometry of three-dimensional space can be explored by knotting phenomena using precise mathematics. The aim will be to find invariants that distinguish knots, to investigate geometric properties of knots and to see something of the way they interact with more adventurous three-dimensional topology. The book is based on an expanded version of notes for a course for recent graduates in mathematics given at the University of Cambridge; it is intended for others with a similar level of mathematical understanding. In particular, a knowledge of the very basic ideas of the fundamental group and of a simple homology theory is assumed; it is, after all, more important to know about those topics than about the intricacies of knot theory.