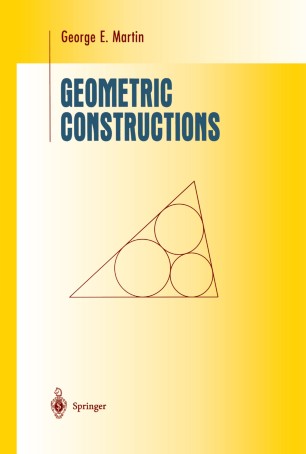 Geometric constructions have been a popular part of mathematics throughout history. The ancient Greeks made the subject an art, which was enriched by the medieval Arabs but which required the algebra of the Renaissance for a thorough understanding. Through coordinate geometry, various geometric construction tools can be associated with various fields of real numbers. This book is about these associations. As specified by Plato, the game is played with a ruler and compass. The first chapter is informal and starts from scratch, introducing all the geometric constructions from high school that have been forgotten or were never seen. The second chapter formalizes Plato's game and examines problems from antiquity such as the impossibility of trisecting an arbitrary angle. After that, variations on Plato's theme are explored: using only a ruler, using only a compass, using toothpicks, using a ruler and dividers, using a marked rule, using a tomahawk, and ending with a chapter on geometric constructions by paperfolding. The author writes in a charming style and nicely intersperses history and philosophy within the mathematics. He hopes that readers will learn a little geometry and a little algebra while enjoying the effort. This is as much an algebra book as it is a geometry book. Since all the algebra and all the geometry that are needed is developed within the text, very little mathematical background is required to read this book. This text has been class tested for several semesters with a master's level class for secondary teachers.