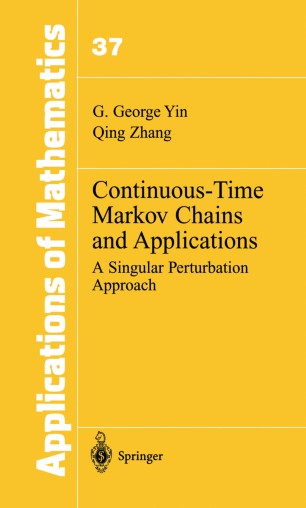 Part of the Applications of Mathematics book series (SMAP, volume 37)

This book is concerned with continuous-time Markov chains. It develops an integrated approach to singularly perturbed Markovian systems, and reveals interrelations of stochastic processes and singular perturbations. In recent years, Markovian formulations have been used routinely for nu­ merous real-world systems under uncertainties. Quite often, the underlying Markov chain is subject to rather frequent fluctuations and the correspond­ ing states are naturally divisible to a number of groups such that the chain fluctuates very rapidly among different states within a group, but jumps less frequently from one group to another. Various applications in engineer­ ing, economics, and biological and physical sciences have posed increasing demands on an in-depth study of such systems. A basic issue common to many different fields is the understanding of the distribution and the struc­ ture of the underlying uncertainty. Such needs become even more pressing when we deal with complex and/or large-scale Markovian models, whose closed-form solutions are usually very difficult to obtain. Markov chain, a well-known subject, has been studied by a host of re­ searchers for many years. While nonstationary cases have been treated in the literature, much emphasis has been on stationary Markov chains and their basic properties such as ergodicity, recurrence, and stability. In contrast, this book focuses on singularly perturbed nonstationary Markov chains and their asymptotic properties. Singular perturbation theory has a long history and is a powerful tool for a wide variety of applications.