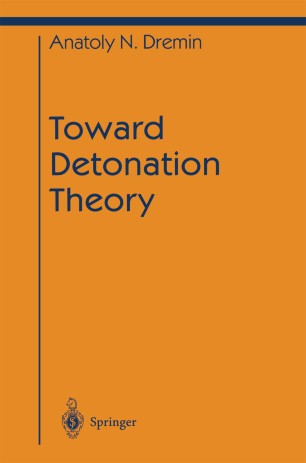 It is known that the Chapman-Jouguet theory of detonation is based on the assumption of an instantaneous and complete transformation of explosives into detonation products in the wave front. Therefore, one should not expect from the theory any interpretations of the detonation limits, such as shock initiation of det­ onation and kinetic instability and propagation (failure diameter). The Zeldovich-Von Neuman-Doring (ZND) theory of detonation appeared, in fact, as a response to the need for a theory capable of interpreting such limits, and the ZND detonation theory gave qualitative interpretations to the detonation limits. These interpretations were based essentially on the theoretical notion that the mechanism of explosives transformation at detonation is a combustion of a layer of finite thickness of shock-compressed explosive behind the wave shock front with the velocity of the front. However, some experimental findings turned out to be inconsistent with the the­ ory. A very small change of homogeneous (liquid) explosives detonation velocity with explosive charge diameter near the rather sizable failure diameter is one of the findings. The elucidation of the nature of this finding has led to the discovery of a new phenomenon. This phenomenon has come to be known as the breakdown (BD) of the explosive self-ignition behind the front of shock waves under the effect of rarefaction waves.