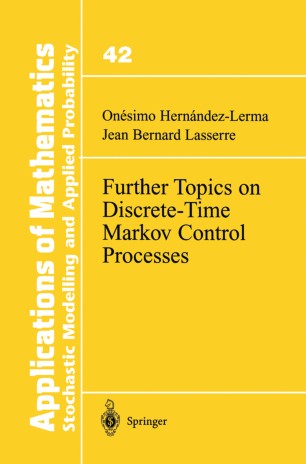 Part of the Applications of Mathematics book series (SMAP, volume 42)

This book presents the second part of a two-volume series devoted to a sys­ tematic exposition of some recent developments in the theory of discrete­ time Markov control processes (MCPs). As in the first part, hereafter re­ ferred to as "Volume I" (see Hernandez-Lerma and Lasserre [1]), interest is mainly confined to MCPs with Borel state and control spaces, and possibly unbounded costs. However, an important feature of the present volume is that it is essentially self-contained and can be read independently of Volume I. The reason for this independence is that even though both volumes deal with similar classes of MCPs, the assumptions on the control models are usually different. For instance, Volume I deals only with nonnegative cost­ per-stage functions, whereas in the present volume we allow cost functions to take positive or negative values, as needed in some applications. Thus, many results in Volume Ion, say, discounted or average cost problems are not applicable to the models considered here. On the other hand, we now consider control models that typically re­ quire more restrictive classes of control-constraint sets and/or transition laws. This loss of generality is, of course, deliberate because it allows us to obtain more "precise" results. For example, in a very general context, in §4.