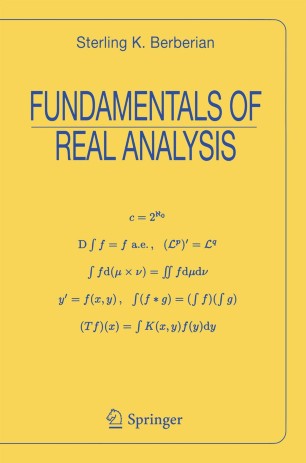 Integration theory and general topology form the core of this textbook for a first-year graduate course in real analysis. After the foundational material in the first chapter (construction of the reals, cardinal and ordinal numbers, Zorn's lemma and transfinite induction), measure, integral and topology are introduced and developed as recurrent themes of increasing depth. The treatment of integration theory is quite complete (including the convergence theorems, product measure, absolute continuity, the Radon-Nikodym theorem, and Lebesgue's theory of differentiation and primitive functions), while topology, predominantly metric, plays a supporting role. In the later chapters, integral and topology coalesce in topics such as function spaces, the Riesz representation theorem, existence theorems for an ordinary differential equation, and integral operators with continuous kernel function. In particular, the material on function spaces lays a firm foundation for the study of functional analysis.

"This book is very well organized and clearly written and contains an adequate supply of exercises. If one is comfortable with the choice of topics in the book, it would be a good candidate for a text in a graduate real analysis course." -- MATHEMATICAL REVIEWS
Buy options